The whole of Eni’s history, since its founding in 1953, has been characterised by challenges met and the realisation of projects that, to many, appeared impossible.

have been the result of a profound conviction that the oil and natural gas industry is a frontier activity.

For Eni the difference lies in the constant search for new personal and technical challenges with a view to continuously improving performance and technologies.

Since 1999 Eni has been engaged in a new, and perhaps its most important, challenge: the challenge of growth based on an unprecedented programme of strategic development.

It is a challenge that, in a period of large-scale mergers between the major players in the sector,

runs against the tide by being based on a policy of acquisitions of medium-sized operators with synergic potential and an intensification of exploration efforts in high-potential areas of the world.

In addition to these operating results, Eni has also radically reorganised its corporate structure by incorporating the principal operating companies

and creating divisions for the management of its main activities.

Today Eni is a large and independent international company in the oil and natural gas industry focused on three main business activities:

A determining feature of Eni has always been a marked ability to integrate with local cultures and adapt to widely different environments and situations.

It is a capacity that is reflected in an unwavering respect for the places where and the people with whom Eni works.

All this is Eni. A world of values, a team of people, a series of differences that make the difference; what is known as Eni’s way.

In an increasingly competitive market, our company is constantly evolving in order to meet consumers’ needs.

So it’s only natural that there be an evolution of the image with which eni presents itself in the 70 countries in which it operates.

The evolution of our corporate image reflects the integration of all our businesses into a single entity, operating in numerous sectors,

but communicating with one name and one brand. A single brand ensuring greater consistency and efficiency in communication.

Furthermore, in terms of graphics, the new logo conveys dynamism and openness.

A way to reflect “open energy”, something which has always been a hallmark of eni and which makes us a reliable partner for producers, suppliers, local communities and consumers.

Today, the logo is more than anything else a logo in motion. It retains all the powerful elements which have been a part of eni’s heritage for years, such as the six-legged dog, the yellow square and outlined lettering, but now with innovative new features.

The six-legged dog is coming out of the square, moving towards a new corporate reality. The lettering is original, located on the bottom of the square and in lower case, to highlight the close and equal relationship that eni would like to establish with its stakeholders.

For the first time the logo has become interactive and deconstructed in order to best highlight company character: open, dynamic, integrated. 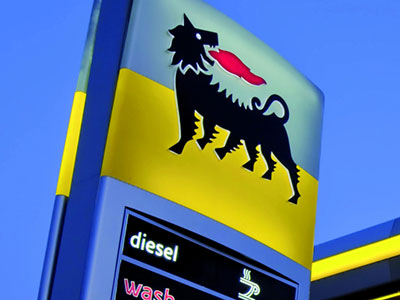 Find right oil for your vehicle 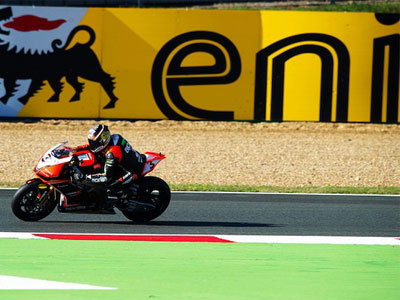 Check out what's happening around Eni 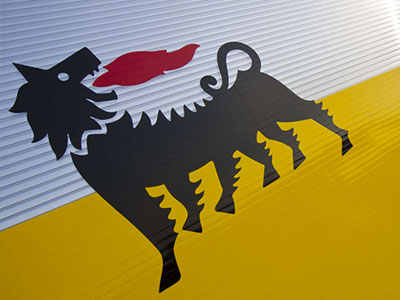 Get in touch with us

We are ready to answer to all related questions